We have just received Joe Howard's composition which was loosely (and, in the end, most accurately based) on our brief! We received this last week and Joe will make final changes after our September recording sessions by adding electronic sounds to it. I think the 24th October is probably the hottest ticket in town as Animo will be unveiling this brand new piece!

The working title is 'Ex Arcadia'. Arcadia = Pastoral but not quite...!

Joe gave me some background on his composition. I always love to know what sits behind everything - musical or otherwise- so for me this is the most exciting aspect of working with a composer; you get first hand knowledge! Joe very kindly responded to my many questions.

He said:
I started by taking an old piece (written in 2015) for alto flute/flute, bass clarinet/clarinet, vibraphone, harp, percussion. I liked some of that piece, but not all of it. So I took some of the flute lines and meddled with them. Not a lot remains from that original piece now; indeed it's not really recognisable at all.

I asked him about how we came up with the individual themes:
The theme in the first movement came from gradual transformation from the older piece. The theme of the second movement (the first few bars of it) is loosely related, with added rhythmic impetus. The second movement is in part an exploration of that new rhythm.

And what is it that he hears in his head when he writes to the two instruments:
Sometimes I'm thinking of the piano as being 'like a harp' or 'like percussion'. I'm aiming to blend the instruments as well as I can - alto flute with piano felt quite unusual in this regard. I haven’t really written that much for flute, certainly not in a ‘foreground’ context. So a big part of writing this piece was about trying to find ‘my’ flute voice.

A few months ago we Skyped Joe and one of the things we talked about was that we were open to any and all ideas but what really intrigued us was the idea of having pre-recorded material against which we perform live. Joe commented on this:
I've done this [incorporated pre-recorded material] once before with a solo clarinet and pre-recorded clarinet piece. I like to have the option to expand the possibilities of the live instruments and to have the extra outlet (more lines, etc.) where I think the music needs it. The end result might throw up some more additions/changes - we’ll see! (can't wait!).

On the way to the train station after Joe made the journey to Gloucestershire to meet Animo, I had a chance to ask him about his background and his ambition as a composer. He mentioned that would like to be positioned between contemporary (edgy, hard core, abstract) and popular music.

I asked him how this composition compares with he has written and in past and now. He said:
I'm trying to explore more electronic elements in my pieces and blend acoustic instruments either with electronics or with multiple versions of themselves.

Part of what Animo want to do is to tour the UK's schools and universities to share our 'new music project' journey with everyone and talk about the composers, their ambitions, their inspiration and their journey to write music for us. Asked Joe how he would present this piece:
I would give the explanation of the title [The main 'narrative' idea of the piece is that the first movement is somewhat 'pastoral' in mode, but that the second movement 'moves away' into something other than that]... and explain the technicalities of the recordings, what they are, how they'll be triggered, how they were recorded, etc. All this so they have a rough idea of how it the piece will go.

My next question was: Has anything we said [...] influenced this composition?
I feel like you gave me quite free reign, which was really nice to have - thanks!

Joe's hard work is not obvious not can it be limited to one sentence but, as he said, the piece has undergone many changes and alterations to arrive to this point.

We are so thrilled to have started this journey. To those of you who were invited to our launch, we do hope you will press pause and enjoy this moment, when a new piece is born out of squiggles, notes on a page, and flies out into the space it's performed to, only to find its place and sound and become forever alive.

Thank you Joe. Now it's time for us to put in the hard work! 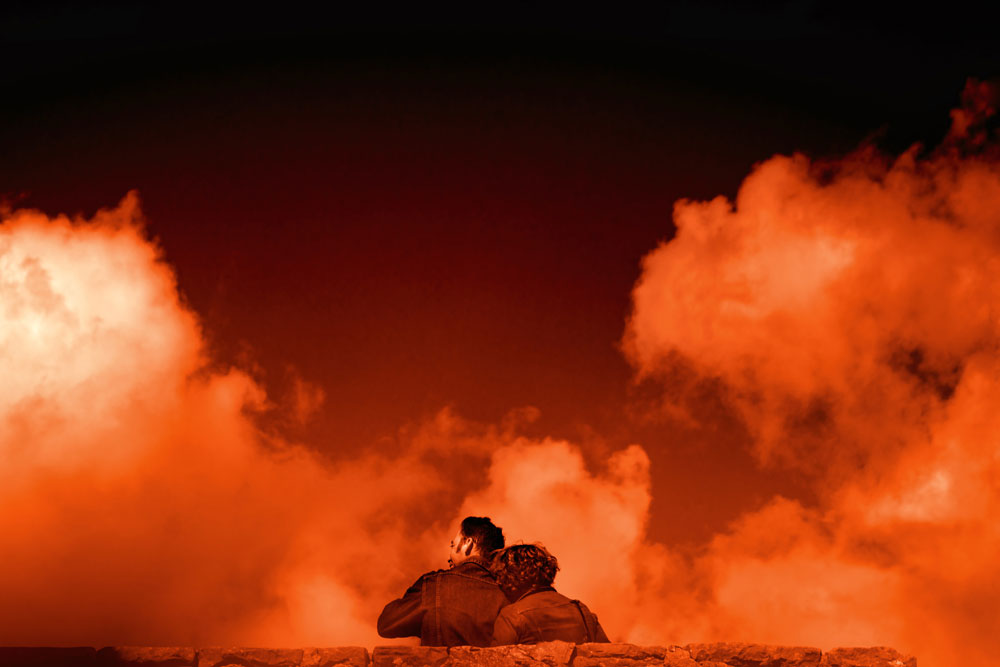