We are totally excited to be announcing our first group of composers to be commissioned by us to write music for Animo ready for concerts and recordings in 2020!

Our call for a Launch Composer was shared among Music Colleges and was posted on Composition Today resulting in over 35 composers contacting us to ask us to commission them.

We decided to commission 5 or 6 composers annually until 2024 and so we are creating the future of Animo with exclusive rights to each composition for the first 1.5 - 2 years. Our dream is to build a fabulous library of new repertoire which represents us and our ethos and gives us a chance to take this experience and share it with our audiences but also Schools, Colleges and Universities.

Edmund’s music embraces a huge range of styles from contemporary classical to songs for shows. He writes music for film and television, but is also an award winning concert composer (Prizes). His music is published, performed and broadcast all over the world.

He has been writing music to picture for over fifteen years, both in the UK and internationally. Many of his projects have been nominated for or won numerous awards, including BAFTAs. Major series he has composed music for include ‘Who do you think you are?’ (BBC1), ‘The Great War: The People’s Story’ (ITV1), ‘Homestead Rescue’ (Discovery) ‘My Kitchen Rules’ (Sky) ‘Long Lost Family’ (ITV1) and ‘Unreported World’ (C4). He was nominated for an RTS Craft and Design Award for his score to BBC 1’s ‘Elizabeth at 90’.

More recently, Edmund has been working on a documentary about Tudor Christmas (due to be shown on BBC 2, 20th Dec), finished writing the score for two series of Unreported World and a cookery series coming out in February, writing music for a further two documentaries, composing a full album of Music Library and proofreading a new publication of clarinet and piano pieces. Edmund has just started writing our piece and his first request was to ask Sarah is she can produce a sound on the flute that sounds like a puffin (see below!).

Animo are thrilled to have commissioned Edmund to write a piece for us based on the RSPB's list of endangered birds.

February update: Edmund is working on 3 new pieces for us after we changed our mind (sorry Edmund) about the first drafts but what is happening at the moment is simply astonishing! We have three challenging pieces based on the RSPB's Red list of endangered birds. So, pretty soon three birds will fly the nest: the cuckoo, 'sky dancer' (hen harrier)  and the lesser spotted woodpecker are all ready to soar. Piano wood trills, flute murmurations and a huge respect for Edmund's skill to transform the ordinary to extraordinary.!

Lukas Piel (*1989) is a Composer and Sound Designer from Essen, Germany.

Lukas is a multi-instrumentalist and has toured with different bands and ensembles both in his home country and internationally. As a composer he has written music for Film and Video games and this is what attracted us to choose him as one of our five 'new music project' composers for 2020.

Lukas was nominated for the European Soundtrack Cologne Award in 2017 and 2019.

We are excited that he has agreed to write for us based on his Soundtrack expertise. Three examples of his compositions are below:

We are very excited to hear Lukas' second draft of our piece which already sounds astonishingly beautiful and haunting (just what we wanted!). A sneak preview will appear on our blog in late January 2020.

February update: January 2020 has gone so now the sneak preview will be at the end of February! Lukas has very nearly finished the composition and it sounds exactly how we thought it might. We are now on teaser 3 and the real work for him will start as he begins to write out our parts and guide of the background soundscape. Lukas has chosen a clever device of a clock that ticks the main "spine" of a beat throughout the piece. As the piece is for live instrument against a pre-recorded electronic soundscape, we find ourselves once again in our element. As soon as the score arrives we will have a better idea of the challenges ahead.

Helen Walker is a (soulful) musician, composer, songwriter and record producer. Helen's music can be found on social media and is diverse, intriguing, beguiling and with a fine blend of jazz, folk and fun! We were very grateful that she and her husband (also a fine musician) came to our launch. It was a meeting of minds and hearts.

We hope that working with Helen, Animo will develop a new sound out of this collaboration.

When Helen first approached us she said:

Having listened to your music on your website I feel I may be of interest to you because I tend to write eclectic and melodic music with jazz influenced harmonies. I’d be happy to "shape the piece to your strengths” and have it evolve through your input.

We are very excited at the prospect of working with Helen. It was because of her enthusiasm that we started the 'new music project' and we are proud to be working with her.

'Gather Here’ was winner of the Alwinton Summer Concerts 2016 National Composers' Competition. Premiered by Kathryn Tickell & The Side and subsequently added to their setlist.

'Divertissement No.3 for Guitar’ was playlisted on BBC Radio 3 as part of the ‘Hear Her Season’ June 2018.  https://www.youtube.com/watch?v=OVOk9ObO2L0

February update: Helen has completed her composition which is in five parts. Short movements but full of vibrancy and emotion they are written for Alto and Piccolo flutes. Helen and Sarah spent some time discussing the different tone of each flute and range and how the compositions can sound best. It's the most interesting part of commissioning compositions: performers and composers come from different places and yet they somehow have to meet and at times yield to the other's ideas or wishes but always respect each other's opinion. Our collaboration with Helen was different again. Helen prefers to work separately and so her ideas poured out of her and into 5 finished pieces. Then discussions followed and many questions. We expect that there will be a few adjustments before the work gets its first outing and even after that. We hope to perform some of her pieces during the 1st Birthday celebrations at the Take4 Gallery on 4th April.  It feels so rewarding to have Helen's voice in our portfolio!  Recorded segments of her new work together with score excerpts will be on our Blog shortly. The final work will be performed at Hellens Manor on August 2nd 2020.

Tara Guram is another wonderful composer that we are looking forward to working with.

Initially a geneticist, Tara was subsequently a prize-winning postgraduate student at the Royal College of Music, where she studied with Edwin Roxburgh.  Her music has been played throughout Britain, broadcast on BBC Radio 3, recorded with Sargasso records, and also performed in Mexico, Germany, Switzerland, France and Jordan.  Previous commissions have included pieces for the Brighton Festival, the International Harp Festival, and the Sound and Image Festival in Bonn.  She has won several composition prizes including the U.K. and Eire Composition Platform 2002 Audience Prize, and was a finalist for the Young Composer’s Award in 2000.  Tara also works as an upper strings teacher and ensemble director for Hertfordshire Music Service.

Tara's eccentric, surprising and extra-ordinary compositions have intrigued us. We really want to work with her to see what ideas we can bring together and how her imagination can mould our sound.
Tara's music:
Here is a Tara Guram's 'Loopy Valse' which she has recommended as an example of her style:
https://www.youtube.com/watch?v=nZYh24SSiNI

We are so excited after our first official Skype with Tara! The ideas came rushing in after our initial rendition of her draft idea. In her own words: "the plan would be to start from nothing, build up with this idea to an anguished climax of utter grief, and then back to nothing.  I do try to be cheerful!!" Well, we absolutely love the anguish and the ideas of how Sarah's sound can start from nothing, how the piano can incorporate the middle pedal (don't get those chances very often!) and how we can build this together. Wouldn't it be nice if this piece keeps evolving?

21st February update: Tara and Animo met at Eden's Hill Studio and created new concepts, ideas from which new ideas will be born. Our Blog tells the full story.  Tara's themes are about endless grief, sadness, inevitability and yet, somehow, about hope. Thank you Tara. You are an incredible person and we loved working with you!

Photo and Video from this February meet: 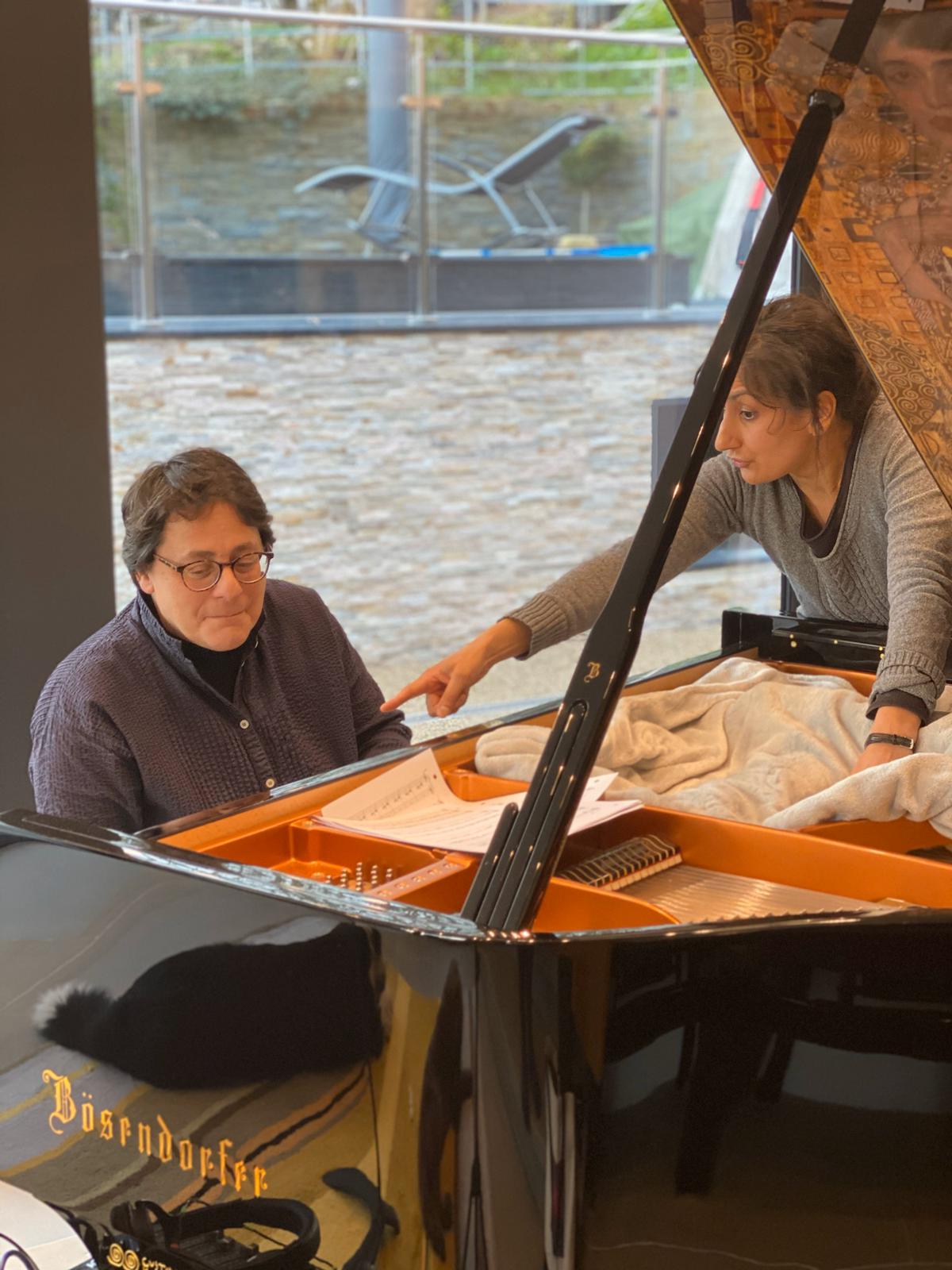 Yiannis Maramathas is a Greek composer who approached us as a response to an ad on Composition Today. We were immediately taken by his heartfelt, effortless, some times playful and elegant approach to composition. Animo have a lot to learn from Yiannis and we hope that together we will learn more about ourselves and stretch our skills and musicality.

Yiannis Maramathas was born in Athens where he started his music studies at the age of nineteen alongside his studies at the National Technical University of Athens (NTUA). In 2016 he graduated from the Department of Naval Architecture & Marine Engineering of the NTUA and he was enrolled at the master’s degree program of the Department of Musical Studies of the Ionian University, “Composition for Film, Theatre and Performing Arts” where he graduated in 2017. In the period between 2016 till 2018 he took composition lessons with Cornelius Selamsis.  In September of 2018 he was enrolled at the Masters in Composition program of the Royal College of Music in London where he is currently studying with Dr. Jonathan Cole. Works of his have been performed at the Athens Concert Hall (Megaron), at the Theocharakis Foundation for the Fine arts & Music and the Recital Hall of the Royal College of Music. He has worked with, among others, the Ionian Festival Ensemble and the Hellenic Group of Contemporary Music. He has composed music for theatre, dance performance and video art.

Some examples of Yiannis' works can be found on soundcloud:

Joseph Howard was our Launch Composer. We premiered his piece on the 24th October 2019.

There are several blogs that Yanna wrote about him and his Animo commissioned piece, 'Ex Arcadia'.

Having worked with him we feel extremely lucky that we had the chance to play a piece so beautifully crafted. Joe is an up and coming composer and we will hear a lot from him in the next few years.

Thank you for a brilliant first commission Joe!

Below videos from the journey to premiering 'Ex Arcadia' at our launch in October 2019.